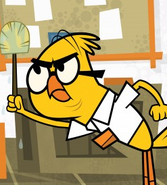 Nestor, or Nester, is one of the main characters of the TV show Scaredy Squirrel. Nester is the Assistant Deputy Manager at the Stash N’ Hoard Stash N' Hoard along with being the store's owner's son. He doesn't really like Scaredy Squirrel and he is considered one of Scaredy's frenemies. He usually just ignores Scaredy and try to run the store, although his attitude with costumers can be blamed on either him, or Scaredy. In occasion, he sometimes teams up with Scaredy or helps him.

Nestor is a yellow chicken with glasses and always wears a manager pin and a work shirt. He can usually be seen in his "office," which is actually the store's storage area. His attitude differs widely from Scaredy's.

Nester can be described as the non-helpful type and usually ignores Scaredy. He shares some of his attitude with his mother, who owns the store. Nestor usually dislikes Scaredy for unintentionally messing-up his store. Sometimes when Scaredy fixes the store after messing it up Nester will often take credit for solving the problem and tries to look good in front of his mother even though she doesn't care at all. sometimes when the store is destroyed and Nester's mother returns from where ever she was going before they had time to clean it she will often blame the mess and destruction of the Stash 'N Hoard on Nester. Just before she blames it on Nester will tell his mother that it was Scaredy and Dave's fault for the destruction of the store and that always back fires on him.

Community content is available under CC-BY-SA unless otherwise noted.
Advertisement